The difficult thing was that, I couldn’t find any article which explains about the migration from 32-bit architecture to 64-bit architecture. May be I am not that good in googling.

First thought which came to my mind was to export all printers settings (Printer name, driver name, model, printer port name, printer port IP, printer share name etc.) to a text file using the inbuilt vb scripts in windows and then format it to a CSV file.
With the CSV file as source, PowerShell can be used to add printers to the new server using Add-PrinterPort and Add-Printer command-lets. I was able to migrate the printers to new server with the Name, share name, port, comments, location etc. But I was stuck at paper size. I was not able to set custom size(Height and Width) for the label printers.

Then I used PrintBrm.exe to export the printer’s and import failed again. 🙁

The issue was with the driver “name” as mentioned above.

Added the latest driver to windows 2003 to match the driver name. In the list of printer drivers, the new name was available.

For ease of login, both old and new servers local administrator id and password is set to same.
From windows server 2016, Following PowerShell script was run to change the drivers in Windows 2003.

While the script is running, we can see the driver getting changed in the windows 2003 server printer console

Double click the above created file to import the printers with all settings.

That’s it! All your printers are in the new server.

Thank you for reading my post. Hope it is helpful to you. 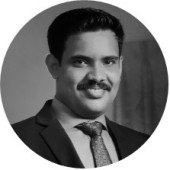 I am Jeffy Thampi. I have 8+ years of experience in IT with strong focus on Cloud, Infrastructure related technologies and PowerShell scripting. I have been working on Microsoft Azure, Active Directory, Hyper-V, MS SQL etc. and other technologies such as f5 Load Balancer, Veritas backup and many more.

This site uses Akismet to reduce spam. Learn how your comment data is processed.